Junk Status Is Now a Reality – How Will It Affect Us? 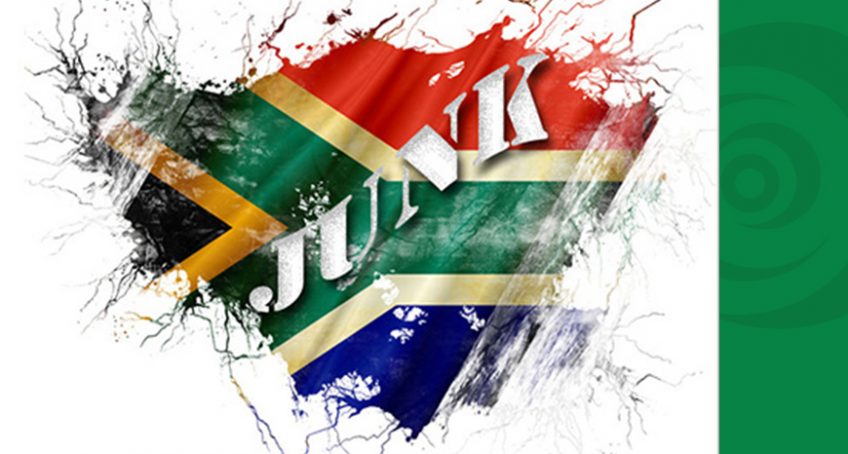 Junk Status Is Now a Reality – How Will It Affect Us?

Events have moved swiftly – on 31 March the Minister of Finance and the Deputy Minister were axed. Ratings agencies Fitch and S&P downgraded South African debt to junk status the next week.

Why the muted response?

In December last year when Mr. Nene was replaced as Finance Minister, it appeared we had fallen off a cliff – the Rand tumbled and interest rates spiked sharply. Since then there were four attempts to replace Mr. Gordhan and thus the market was not surprised by the events of 31 March.
Yet there have been consequences – interest sensitive stocks have dropped R190 billion, South African bonds have shed R100 billion in value, the Rand is 10% weaker versus the US dollar and the cost of financing South African debt has increased by R1 billion per year.

The events so far …

Two of the major rating agencies – Fitch and S&P – have downgraded our foreign denominated debt to junk status. Fitch has also downgraded our Rand denominated debt. Usually for rating downgrades to trigger selling of country assets, two of the three agencies need to declare junk status. As our foreign denominated debt is only 10% of our debt, the response has not been as dramatic as many expected. If our local debt receives a downgrade from Moody’s (they are deciding how to react to March’s events) this will have a much greater impact, particularly as 35% of local debt is owned by foreign investors.
We have been in junk status before following a debt default in the mid 1980s and we came out of junk status in 1999.  See this chart of our grading history since 1994 – 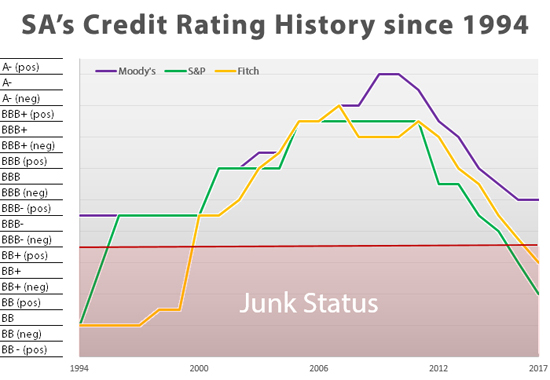 Source: Adapted from a Nedbank chart

The new Finance Minister and his team need to rapidly re-establish credibility in the Treasury. The path of only paying what the nation can afford should remain in place and controls over State-owned entities (such as Eskom) should also be built on.
Mr. Gordhan had the confidence of offshore investors and both Fitch and S&P made it clear they feared that South Africa would not stick to current Treasury policies.
We can go one of two ways:

The man in the street

There will be less disposable income as petrol price hikes, a declining currency, more interest rate rises and stagnant economic growth curb our ability to improve living standards.
What is concerning is that surveys show that 30% of even “well-off” South Africans (i.e. they live comfortably and can cover future unplanned expenses) would struggle with an unexpected bill of R20,000. More and more people live at the margin and will be at even greater risk from the downgrade.
We can also expect unemployment to rise and investment to drop (particularly as foreign investment will substantially reduce). Considering GDP per head has not grown since 2013, you have to question how long the social fabric can hold.
Fin24’s powerful Infographic “How Junk Status Will Affect You” below says it all –
Source:  Fin24